Whatever Works: “The Diabetic Athlete’s Handbook”

“When it comes to diabetes, don’t let the perfect be the enemy of the good enough.” That—or something like it— is what the exercise physiologist at Joslin said. And I agree.

And where am I now? I exercise/train a lot, but I start out with higher blood glucose levels than I would like—sometimes very high—and I tend to drop a bit more than I’d like, too. (For a while that was about the only predictable thing about exercise.) During a couple of races it brought me to a walk, sucking up major time. I haven’t been able to figure out how much insulin (if any) to give when I eat during multi-hour bike rides. And then, of course, I have really good days, too.

I don’t expect perfection. I’d settle for predictability, though I’d really like something closer to “normal” BGs for two main reasons: Better BGs mean better performance, and higher BGs mean a greater risk of long-term complications. I know I have a disease, but I also know that I’ve had great experiences with it. I want more of those. Figuring out how to do that will keep me safer, healthier, and happier. 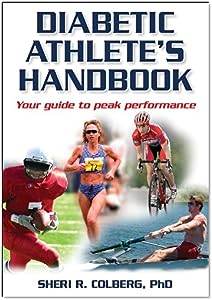 So I finally got around to reading a book that’s been on my shelf for about 18 months: the second edition of The Diabetic Athlete’s Handbook by Sheri Colberg. (I’d started it multiple times, but I’m a champ at getting distracted.) It’s a shame that it took me so long, because it’s full of great information.

The book has two parts. The first provides some general background on the physiology of exercise—how our bodies use energy—along with how diabetes alters this and the main ways that we can work it. The latter chapters of the book give some recommendations for specific athletic activities: from cycling to kickboxing and everything else.

I found the physiology parts really interesting. [2] The body is a mysterious thing, and I like learning how to make it work well. Here’s a bit of useful information from the book:

There’s so much information in the book—including some charts that might help you determine how much to change your insulin dosages before exercise and events—that it’s really worth getting your own copy and going through the first 125-or-so pages.

I’m going to sum up the remaining 140-ish pages, which are also very useful, this way: Whatever Works. Colberg divides more than 60 different sports and activities into five general categories, gives some guidelines about how to approach them diabetes-wise, and then provides a bunch of information from different athletes about what works for them.

That last part of each section was the most instructive aspect of the book for me. Technically, it didn’t teach me much new, but it let me know that there’s no best way—much less one right way—to approach exercise and sport with diabetes. In one paragraph an athlete describes what works for him or her, while the next shows someone doing something that seems almost 180-degrees opposite. There may be a half-dozen “right ways” to exercise or compete in an event with diabetes. Not only may your diabetes vary from mine, but it might be possible for the same person to get to the same outcome (more or less) consistently using different techniques.

Whatever works. The key then becomes finding what works for you. This book can help get you there by understanding what your body is likely to do for different activities and then providing you some suggested starting points and anecdotes about what has worked for others.

From there it’s all trial and error . . . and note-taking. But that’s something to take on next time.

2 — Full disclosure: The year-long course in anatomy and physiology was my favorite high school class. [Back . . .]

This entry was posted in 101 in 1001, Book Notes, Cycling, Diabetes. Bookmark the permalink.

2 Responses to Whatever Works: “The Diabetic Athlete’s Handbook”